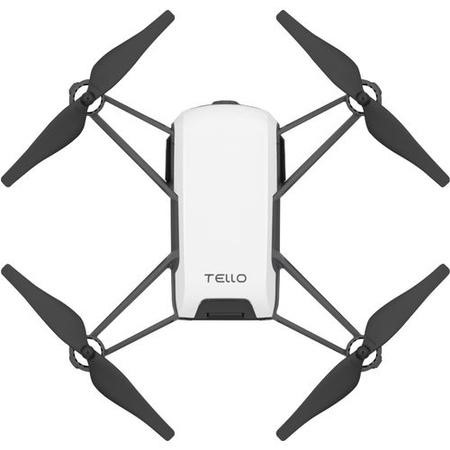 If you have seen this product cheaper elsewhere you could take advantage of our Price Match Promise!. Give us a call on 1520 932 633 and we will try and price match where possible! Terms & Conditions apply.

Designed for fun! The Tello drone is refreshingly simple and unlike any other micro drone you've seen before. It's easily controlled from your smartphone and packed full of tech from Intel to help beginner pilots and kids into the air, everyone can fly with confidence.

This nifty drone neatly fits into the palm of your hand and weighs in at just 80 grams. It's scrapped any cumbersome landing gear and instead uses the bottom of its rotor arms as feet, resulting in a more compact air frame that's perfect for flying indoors and out, when the weather's cooperating of course. From the palm of your hand simply toss this micro drone into the air to get started or just tap your smartphone.

You'll be pleasantly surprised that a drone this dinky can soar the skies for up to 13 minutes. Giving you plenty of time to explore your surroundings and pull off some awesome mid-air tricks with a simple slide of your finger on the screen. There's also some flight modes to test out too, making it easier for beginners to capture professional like footage. Shoot a quick 360° video, film in a circular pattern and also shoot whilst the drone flies away and upward from you in one smooth motion. The 720p camera with electronic image stabilisation captures quality footage every flight.

That's not all, once you've got to grips with the Tello the next step is programming your own flight pattern. Plot your aerial manoeuvres with the included coding tool Scratch, a visual coding system developed by MIT, that enables you to learn the basics of programming. More advanced users can also develop software applications for the drone. You'll never get bored with the Tello drone.

What's in the box?

Question from Reace: Asked on 01/04/2019 Does this drone not come with a charger? If not, how does this charge?

This does not come with a charger, you will have to purchase one separately.

To add to your order, simply select "Add to Order" and then add your product to basket as normal.