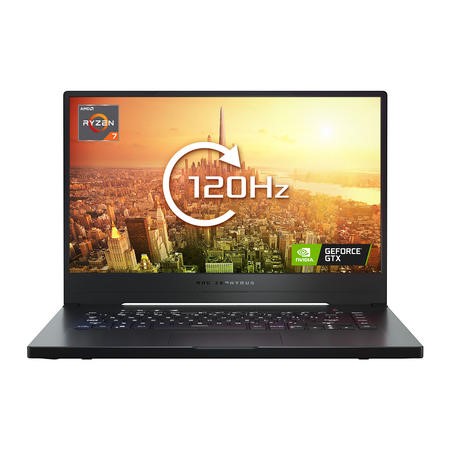 Sorry, I’m out of stock!

Other customers search for...

The New Asus ROG Zephyrus GA502DU offers the ultimate gaming experience in a portable and powerful gaming notebook. At 19.9mm height and weighing less than 2.2kg, the new Zephyrus does not cut any corners on performance. Expect outstanding visuals with a full IPS display boasting 120hz 3ms response time in an ultra thin bezel. Demand to dominate with the ultimate power at your fingertips; Nvidia GeForce GTX 1660Ti and AMD Ryzen 7 processor.

Imagine a compact gaming laptop that punches well above its weight — that's what the new Zephyrus brings to the party. It's powered by the latest AMD Ryzen processor, which has quad cores and eight threads capable of speeds of up to 3.7GHz. And it's not just for gaming, Zephyrus GA502DU allows for faster, more efficient multitasking, including daily productivity tasks, surfing the net, and watching movies and videos, powered by 76Whr battery giving upto 6 hours battery life. Dominate games with Nvidia GeForce GTX 1660Ti Graphics which boasts significant performance boosts from previous generations, the GA502DUis up to the task, inside and outside the gaming arena.

The new NanoEdge design has a slimmer-than-ever 6.2mm for extremely engaging visuals in a much more compact package. Boasting a very impressive 81% screen ratio, the GA502DU features an ultrafast IPS-level panel for supersmooth gameplay with minimal motion blur. Wide-view technology ensures consistent colors when you're viewing the screen from extreme angles

The system automatically adjusts fan speeds according to CPU and GPU temperatures. Switch between Turbo, Balanced, and Silent modes to suit the situation at hand. Turbo mode is the most aggressive setting, providing the highest fan speeds and frequencies to fully exploit the power of GA502DU. Balanced mode optimizes performance and cooling to lower noise levels under 45dB for gaming, while Silent mode further curbs fan noise and is perfect for surfing the net, getting work done, or watching a movie. A default Windows profile with stock settings or a Manual mode let you quickly adjust fan speeds individually by a convenient keyboard shortcut

DTS Headphone: X™ technology delivers immersive, high-fidelity 7.1-channel virtual surround-sound for theater-quality audio, even when you're using a headset. It features optimized settings for games, sports, and movies, and has a built-in equalizer for additional fine-tuning.

GA502DU features a host of I/O ports including a single USB 2.0 and two USB 3.1 Gen 1 Type-A ports for your gaming peripherals, as well as HDMI 2.0 to connect to an external display. All ports are situated on the left side of the laptop so there's nothing to interfere with right-handed mousing

Unlimited access to over 100 high-quality PC games on Windows 10. One month subscription to Game Pass that’s included with the purchase of your device. Download and play new games on day one like Halo Infinite—plus recent blockbusters like Gears 5 and critically acclaimed indie games. With games added all the time, you’ll always have something new to play.

•A massive 512GB PCI-e SSD for all your storage needs